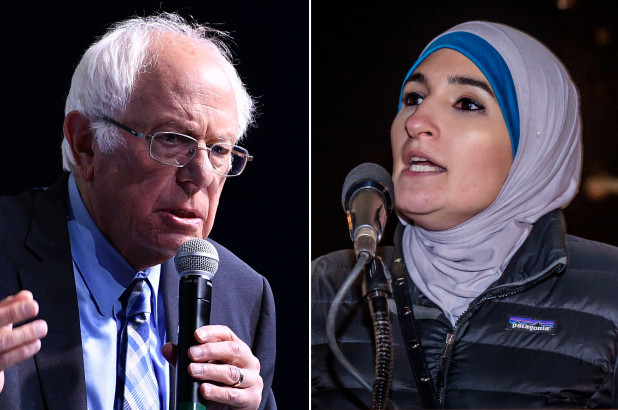 The American Jewish Congress is demanding that Bernie Sanders fire one his top staffers, Linda Sarsour, for “a long history of flagrant anti-Semitism”

Jack Rosen, president of the 101-year-old organization, blasted the Democratic presidential candidate in a scalding letter Wednesday about his controversial campaign surrogate.

“As the only Jewish presidential candidate in the field, and as someone who may become the first Jewish President of the United States, you bear a special responsibility to the Jewish American community,” Rosen said in the blistering letter. “With the tide of anti-Semitism rising worldwide, it is of utmost importance that Jewish political and community leaders, such as yourself, show Jewish Americans that they will stand up for them.”

In her current role, Sarsour frequently travels the nation speaking on behalf of the Vermont Democratic Socialist. She remains in good standing with the campaign, spokeswoman Briahna Joy Gray told The Post in September.

Sarsour delivered a passionate speech in 2015 at prominent anti-Semite Louis Farrakhan’s #JusticeOrElse march in Washington, D.C. She has also heaped praise on Rasmea Odeh, a convicted Palestinian terrorist who helped blow up a Jerusalem supermarket in 1970, killing two people. Sarsour is also a passionate supporter of the Boycott, Divestment and Sanctions movement against Israel.

Sarsour was removed from the board of directors of the Women’s March in September.

JACK ROSEN: I trust Biden to deal with Iran