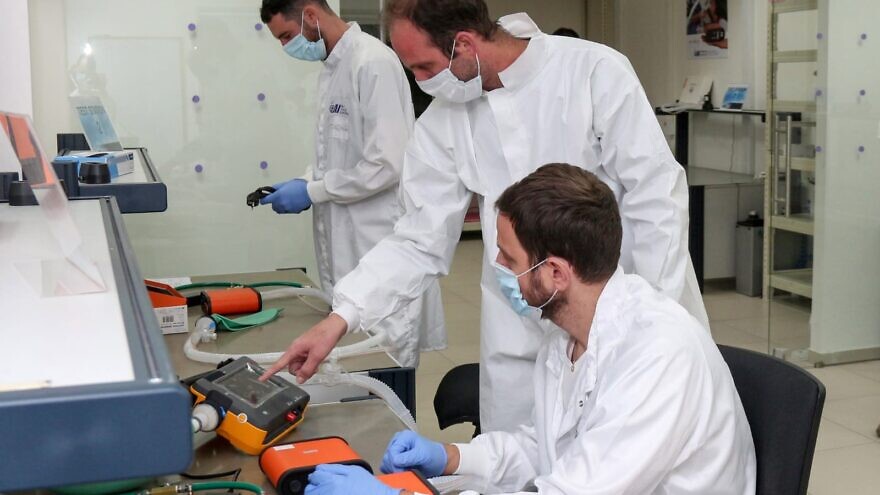 In ordinary times, Israel Aerospace Industry’s Systems Missiles Space group churns out advanced missiles, including interceptors used by the Arrow 2 and Arrow 3 defense systems. During these extraordinary times, the group has added a new production line—one that produces hospital ventilators.

As Israel, like many countries, grapples with a shortage of ventilators in the face of a potential tidal wave of vulnerable coronavirus patients, IAI teamed up with Ra’anana-based Inovytec, which specializes in the production of emergency medical systems, to get the new production line going quickly.

The new cooperation program, which is being conducted together with the Defense Ministry’s Directorate of Production and Procurement, and the Ministry of Health, will soon see hundreds of ventilators being produced, giving Israel a domestic pass production capability.

The new line was set up in a matter of days, and has already produced and tested dozens of machines.

“The issue of ventilators is a significant bottleneck,” an IAI source told JNS. “We have been in contact with the health and defense establishments to see how we can call up our capabilities to assist.”

IAI is working with government-owned companies and start-ups on multiple task forces aimed at finding new solutions to the pandemic. After being put in touch with Inovytec via the Defense Ministry, the cooperation quickly resulted in the production line of the company’s Ventway Sparrow ventilators.

“This is a proven machine in use in Israeli hospitals and abroad,” the source said. But Inovytec’s small size meant it could not rapidly shift to mass production. As a result, IAI entered the picture with its factory, engineers, technicians, and infrastructure, who normally work on building missiles and satellites. Both types of production require great precision and technical checks, the source explained.

The Defense Ministry described the Ventway Sparrow as “a state-of-the-art, turbine-powered, lightweight, easy-to-use ventilator that enables effective invasive and non-invasive mechanical ventilation for both adults and children. The ventilator has been tested for compliance with the most stringent medical standards, and is currently used in hospitals and emergency medical centers in Israel and around the world.”

IAI is also able to procure the materials needed for production and has the logistical prowess to get hundreds of ventilation systems rolling off the production line by next week. “The infrastructure, equipment, electronics and precision that are needed to make missiles fit the production of ventilators,” said the source.

Avi Dadon, head of the DOPP, stated, “Once we were assigned the task of acquiring and producing a maximum number of ventilators in a short period of time, we saw the immediate mobilization of the local industry. A high-tech medical company, working with the excellent defense industry and the Ministry of Defense, has been able to deliver an advanced production line that already issues dozens of advanced respirators within just a few days. We are at the beginning of the road, and in the coming weeks, we will accelerate production rates even further.”

The Defense Ministry noted on Tuesday that “all the parties involved are facing challenges in the international chain of supply and dealing with record demand and difficulty in purchasing components. As a result, all of the relevant bodies in the State of Israel have joined forces in order to achieve what is needed for the production of these crucial ventilators.”

The new production line is one of several efforts under way by the Defense Ministry’s Directorate of Production and Procurement.

The DOPP is also overseeing the purchase of medical equipment and protective gear, including ventilators and masks, abroad. Under the DOPP’s plan, drawn up together with the Health Ministry, this will include 2,500 ventilation machines—1,000 assembled in Israel and another 1,500 bought abroad and flown in. Those target numbers appear to have grown substantially in recent days, in line with potential worst-case scenarios.

In an extraordinary report aired by the Israeli investigative program, Uvda on Channel 22 this week, a Mossad official in charge of a joint operations room at Tel Hashomer Hospital, involving health and defense officials, shed light on the overseas operation aimed at getting hold of the machines.

The program also featured comments by Mossad director Yossi Cohen, who stated, “My central objective is procurement and readiness for the most severe scenarios.”

A man identified only as H, the head of Mossad’s Technological Branch discussed how his organization joined forces with the Health Ministry and brought its operational expertise to the unprecedented overseas purchasing operation. The Mossad has been instructed to bring to Israel more than 130 million items in the next two months that are needed to fight the coronavirus, including protective gear, test kids, medicines, and most of all, ventilators—the subject of fierce international competition around the world.

“The world is selling them in between the cracks. We must find those cracks,” said H. “We activate our special ties to win in this competition.”

He spoke of thousands of leads that the intelligence agency is pursuing. The operation should result in a million-and-a-half N95 masks—vital for medical teams—700,000 surgical masks and a large number of ventilators.

‘We cannot remain dependent on procurement from other countries’

At the same time, officials in Israel are stressing the need to develop rapid self-sufficiency in this field.

Brig. Gen. (res.) Dr. Dani Gold, director of the Directorate for Defense Research and Development in the Defense Ministry, said, “Turning a missile-production line into a ventilator assembly plant is a very complex task, made possible by the collaboration between the Ministry of Defense and the defense industry. We are continuing in the race around the clock to translate the extraordinary tech capabilities of the defense establishment to the fight against corona.”

Udi Kantor, Inovytec CEO, added that “the collaboration with IAI and with the Ministry of Defense is amazing at this time, and it allows us to multiply our production capabilities and supply ventilators in the shortest possible time frame. We are operating in a challenging time, and in a global ‘war’ to acquire the necessary components and fulfill our mission.”

Also this week, the Defense Ministry announced a new agreement with the Sion Medical company in Israel, whose factory is in Sderot, for the purchase of 35 million masks and hundreds of thousands of Uniforms for medical staff. Some 11 million surgical asks will be available by April. The company will also produce 5.5 million N95 masks, and hundreds of thousands of overalls and protective gear.

“A unique machine was brought to Israel with the assistance of the Defense Ministry, in order to enable Sion to open the production line for advanced masks. The machine is the only one of its kind in Israel,” the Ministry said in a statement.