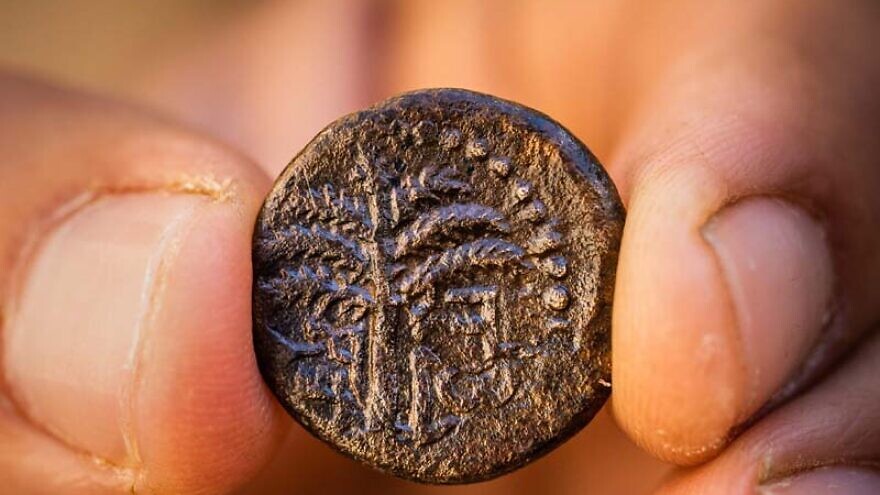 In honor of Lag B’Omer, a Jewish holiday commemorating the life of anti-Roman Torah sage Rabbi Shimon bar Yochai, the Israel Antiquities Authority (IAA) on Monday revealed the discovery of a rare bronze coin from the period of the Bar Kochba revolt (circa 132 C.E.).

The coin was uncovered during excavations in the William Davidson Archaeological Park, between the Temple Mount and the City of David in Jerusalem. The excavations are conducted by the IAA and funded by the Ir David Foundation (Elad), which operates the site.

The IAA says that it is the only coin from the period found in the ancient part of the Holy City that bears the name “Jerusalem.”

According to IAA archaeologists, “It is possible that a Roman soldier from the Tenth Legion found the coin during one of the battles across the country and brought it to their camp in Jerusalem as a souvenir.”

IAA Coin Department head Donald Tzvi Ariel, who has examined more than 22,000 coins discovered in excavations in the Old City in Jerusalem, said that only four of these date to the period of the Bar Kochba revolt.

The Bar Kochba Revolt lasted three and a half years. During that time, more than 1,000 Jewish towns and 50 fortresses were destroyed, and hundreds of thousands of Jews were killed.

Rabbi Akiva—the mentor of Rabbi Shimon bar Yochai—was one of many rabbinical leaders who supported Bar Kochba, and believed that he would be a messiah for the Jewish people.

After news of his criticism of the Roman occupation reached Roman leadership, Rabbi Shimon Bar Yochai was forced to flee with his son, Rabbi Eleazar, and live in a cave for 13 years. He died on the 33rd day (the acronym of the Hebrew letters, lamed and gimel) of the 49-day counting of the Omer, between the second night of Passover and the day before Shavuot.